Mark Heard: A Treasure of the Broken Land

That Mark Heard turned down the offer of touring with Dylan and T-Bone Burnett speaks both of his talent and his humility. He may not have had the chance to make a big splash from that tour, but the ripples of his artistic impact have rolled outwards for years, and the latest example is the tribute album released this autumn to mark 25 years since he died at the stomach-churningly young age of 40.

He motivated some major musicians to write to the best of their ability and particularly inspired fellow Christian writers to keep their songs real. Heard’s words have such prophetic power and poetry, in song after song, that a station announcer could read them over a distorted tannoy and still stop listeners in their tracks.

It’s hard to leave an artistic legacy. It takes talent, the passion to do things better and the courage to do them in a different way. Each of these limits the field until few contenders remain.

Each of these also takes time to develop. Time hones talent until it glows; time feeds dissatisfaction with the status quo; and time allows you to assess the risks you take. So those who leave an influence also leave a story of how first they changed over time and then changed others.

And that makes it particularly poignant that Heard died when he did: it took him a while to get things right – the albums to hear were all made from 1990, in the last three years of his life (beware ‘Greatest Hits’ albums – these were from an earlier label and do not reflect the depth of his work). Who knows what he could have produced over just the next three?

Mark Heard’s storyline is easy to trace through the music he left behind.

Heard’s mid-‘70’s début album, presciently named On Turning to Dust, was well-played and sung, but was in no way ground-breaking – even though he had just been studying under seminal Christian philosopher Francis Schaeffer at his Swiss L’Abri centre.

When the equally seminal Larry Norman came across his work (via musician Pat Terry) and released Appalachian Melody on Norman’s Solid Rock label in 1979, Heard’s songs were lacklustre and his sound owed much to the sparse production and vocal backing (by Norman and his protégé Randy Stonehill) that marked out other Solid Rock albums.

Come the ‘80s and Heard gave glimpses of the poet that he was to become. Songs like “Some Folks’ World” from Victims of the Age showed a broader perspective and a new level of lyric writing. But he was feeling the frustration of the Christian music industry’s shallow marketing policies that have hemmed in many a talented songwriter.

From 1984, he largely recorded at his home studio, so avoiding the compromises imposed on him by labels, and started to flex his musical wings. Under the name iDEoLA, he released the somewhat experimental Tribal Opera, showing an ‘80s sound similar to artists like The 77s, with crisp up-front drums and layers of rippling guitars. This release featured “How to Grow Up Big and Strong” (later bizarrely covered by Olivia Newton-John with an aboriginal twist) generally the earliest of his tracks to feature in tribute albums.

It was from 1990 that the seeds planted at L’Abri bloomed like exotic plants. Flowering in lyrics after lyric, tracks from Dry Bones Dance, Second Hand and finally, 1992’s Satellite Sky are the ones to feature in the tribute albums.

Each of these artists performs in their own style and many songs take on a new urgency and power above Heard’s originals. So when Michael Been sings, “You and me, we know too much,” his raw guitar work deepens the experience. The Choir and Vigilantes of Love both have a similar effect.

Kevin Max opens the collection with “Lonely Moon,” and it sets the tone for one of Heard’s main themes of there being two levels to live on – God’s rich and colourful life (in all its ups and downs) and the monochrome shadow level that the world around us wants to reduce us to.

“They taught him to capture and tame wild pathos
Sold him distractions and made every day seem the same
Caught the Holy Ghost lurking in his cellar and threw Him out
Leaving just a lonely name.”

Heard seems keen for his listeners to wake up to the spiritual reality around us and live accordingly. “We Know Too Much” again:

“We don’t know what became of our fortune
It could rescue or end other lives.
We are gathering speed through this tunnel
To go down where the truth meets the lie.” 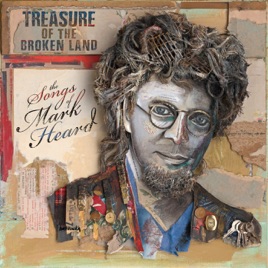 This autumn, Nashville stalwart and member of Emmylou Harris’s Red Dirt Boys, Phil Madeira produced Treasure of the Broken Land to mark 25 years since Heard died. While several tracks and artists overlap with the 1994 compilation, this one has a more unified Nashville feel, less rocky and with greater emphasis on Americana.

There are places of great overlap: both albums have fine versions of “Strong Hand of Love;” both include “Look over your Shoulder,” Over the Rhine doing so in beautifully understated manner on this later set; and both have decent accounts of “I just Wanna get Warm.” The two versions of “Treasure of the Broken Land” could hardly be more different, with Chagall Guevara’s early rollicking version having a wild energy, but Buddy Miller’s slower, acoustic approach having more of the song’s rueful spirit.

Some later versions edge the others: despite the dulling background horns, Lily and Madeleine’s version of “What Kind of Friend” beats Victoria Williams’ strident vocal.

Three of the tracks on this year’s set would have slotted easily onto the earlier one: Sean Rowe’s aching, gravelly baritone delivers “Everything is Alright;” Rodney Crowell’s take on “Nod over Coffee,” is decorated by David Mansfield’s lovely mandolin; and Norway’s Humming People display pace and freshness.

Only available on the later set, The Birds of Chicago’s take on “Rise from the Ruins” has a fine brass section, but sounds like their Alison Russell is trying to quickly finish some food while singing. You’ll need the Internet to discover what she’s on about.

But it’s only on this later compilation that we are treated to Sarah Potenza’s powerful and soulful vocal performance of “Lonely Road,” underlaid with some funky organ. It’s here where Sierra Hull’s mandolin complements Amy Speace’s vocal on “House of Broken Dreams.”

It’s also here that we get the immense poetry of “Dry Bones Dance” and “Nobody’s Looking.” Picking up his theme of the two levels of living, he wrote,

“Every now and then I seem to dream these dreams
Where the dead ones live and the hurt ones heal
Touching that miraculous circumstance
Where the blind ones see and the dry bones dance.”

Looking and seeing is another of his themes. In “Nod over Coffee” he laments,

And here are some snatches of “Worry Too Much,” awarded Song of the Year by the Americana Music Association, words that observe our culture, shot through with vivid heavenly insight. Note how he warns about sandpaper eyes:

“It’s the demolition derby
It’s the sport of the hunt
It’s a proud tribe in full war-dance
It’s the slow smile that the bully gives the runt…
It’s these sandpaper eyes
And the way they rub the lustre from what is seen
It’s the way we tell ourselves that all these things are normal
Till we can’t remember what we mean.
It’s wondering if the good I know
Will last to be seen by the eyes of the little ones.”

You can’t read too many of Heard’s words without spotting how often he refers to death, even premature death.

On “Strong Hand of Love,” he wrote about “loving too late and leaving too soon.”

Heard wrote “Treasure of the Broken Land” mourning his father, but these are words that his family might now use to mourn him:

“I thought our days were commonplace
Thought they’d number in the millions
Now there’s only the aftertaste
Of circumstance that can’t pass this way again.
I can melt the clock hands down
But only in my memory
Nobody gets the second chance
To be the friend they meant to be.”

Heard may have run out of chances, but here are words that can live in the lives of his listeners. And isn’t that mostly the point of writing songs?

This site uses Akismet to reduce spam. Learn how your comment data is processed.